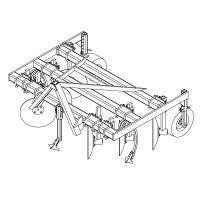 The bed ridger can be used instead of a plough to incorporate crop residue and green manures into the soil. The ridger can also be used to reshape a bed if it has been flattened following cultivation work.

This model of ridger with three discs was chosen because it produces raised beds at least 40 cms high without working the soil too deeply. The spacing of the discs allow the whole surface of a bed to be lightly cultivated. Rather than burying organic matter deep into the soil by ploughing, the organic matter is buried into the ridge, where it can quickly decompose, although dry conditions can hinder the breakdown of organic material. However, there are solutions! We have adapted the traditional asparagus ridger for cultivation work on permanent beds, incorporating into our design double coil goosefoot hoes for weeding paths, depth wheels to adjust the height of the implement, a central ridger to rework pre-existing beds and a quick hitch triangle system so that the tool can be easily mounted to a tractor.

The bed ridger works faster than a 2 or 3 furrow plough. The machinery makes beds 1.90 m wide at a driving speed of 3 to 4 kms per hour. When a bed is no longer in use, it can quickly be ridged up to prevent weed emergence, and worked again in future. The rotating discs suffer a lot less wear than fixed plough implements which are exposed to constant friction. Maintenance costs are thus lowered.

Crop residue and green manures need to be shredded before using the bed ridger in order to for the discs to successfully incorporate organic matter into the soil. The ridger is slightly tricky to operate, especially on a steep camber. This problem is alleviated by the use of rotary rake wheels as depth wheels which help ensure the implement is working at the same depth on either side of the tractor.

This video show the bed ridger in use at the Jardins du temple (Isère, France):

Resources on permanent beds (French only):

The Bed-ridger is a cultivation tool for use on permanent beds. See links below for more information on this cultivation practice:

The technical drawings are also available in the Self-build guide, with additional information and research for permanent bed cultivation.Order a Self- build guide here.